RDI’s Motion Amplification (TM) provides visualisation of a structural fault on a Generator Stator Coolant Pump that has gone unresolved for more than 10 years!

There are two (duty and stand-by) Stator Coolant Pumps (SCP) critical to the operation of each 500+ megawatt turbo generator at the Loy Yang Power Station.  One of the two SCPs for Unit 1 turbo generator has had a long history, more than 10 years, of high lateral vibration, sometimes reaching 20 mm/sec RMS.  There have been many attempts to remedy the problem at an estimated material cost of AU$160k. This does not take into account the estimated labour cost of 500+ man hours and loss of power generation revenue.  Some of the attempts to remedy the problem include: laser alignment, base frame spot welds, bracing of pipework, fitment of flexible bellows to the pump suction and discharge pipework, pump replacement x2, motor replacement, coupling replacement. 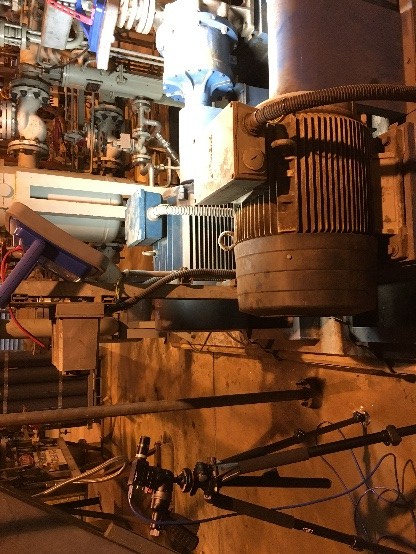 Optical Motion Technologies (OMT) were contracted to apply RDI’s Motion AmplificationTM (MA) technology to solving the long running problem on 1-SCP-2.  From arriving at the location of the SCPs in the power station, setting up the video camera acquisition system and then collecting nine MA videos took less than one hour. This hour included the time to analyse the results all of which was done in the field.  The process involved taking wide angle ‘whole of machine’ videos, analysing them in the field and then honing in with zoomed videos on the root cause of the problem.  It was clear from the MA videos that the problem was a soft foot condition between the pump base frame and skid base plate.  In fact, there was a twisting operational deflection shape of the pump base frame.  During a scheduled outage, a series of fillet welds were made across the suction end the pump base frame to the skid base plate.  When the pump was returned to duty service the high lateral motion and vibration had been reduced by more than 70% and was now less than 5 mm/sec RMS.  The solution to this problem was achieved through the application of RDI’s Motion AmplificationTM technology for a fraction of the time and cost already incurred.

Product of the Month